Over 70 Years in Business Business Est. 1948
Free Standard Delivery* on orders of £100 or over
Great Customer Service Advice to help you choose too!
Cooking / Hobs / Induction Hobs / … 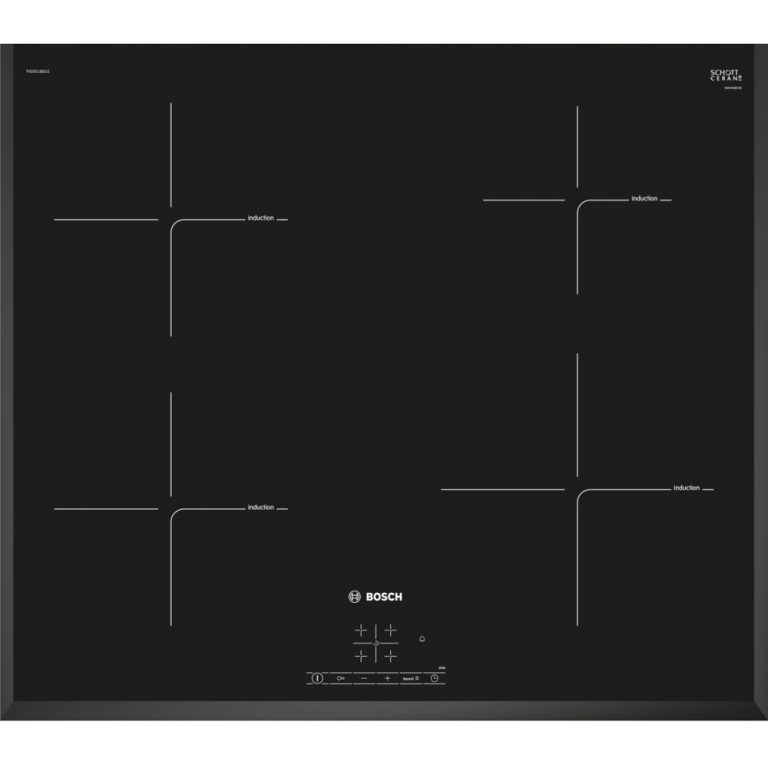 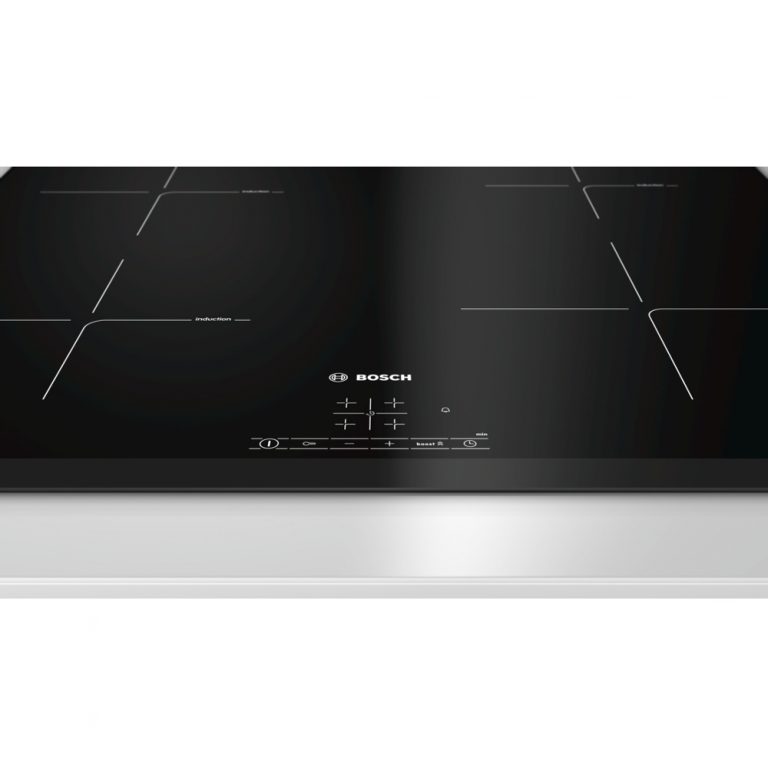 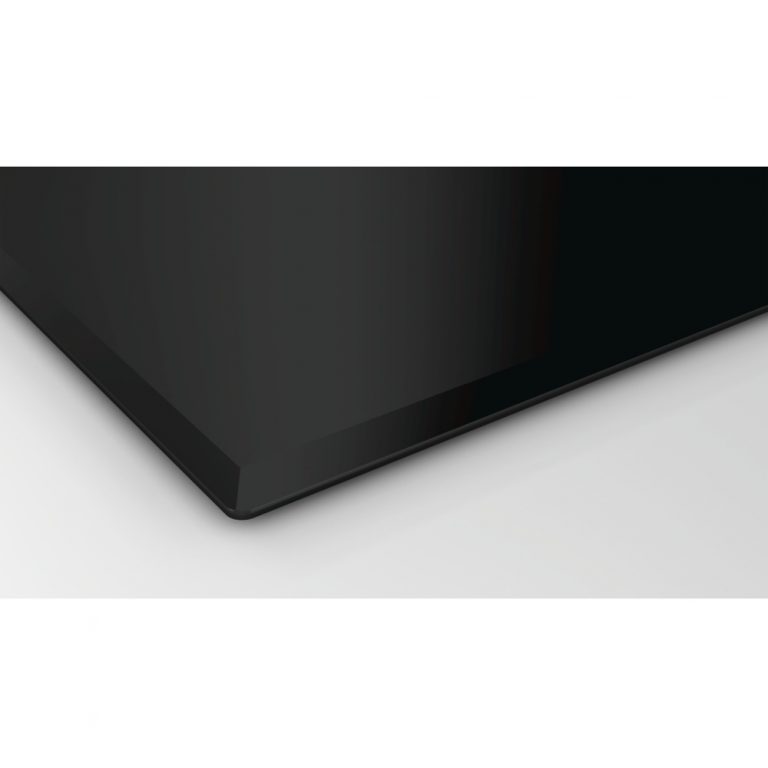 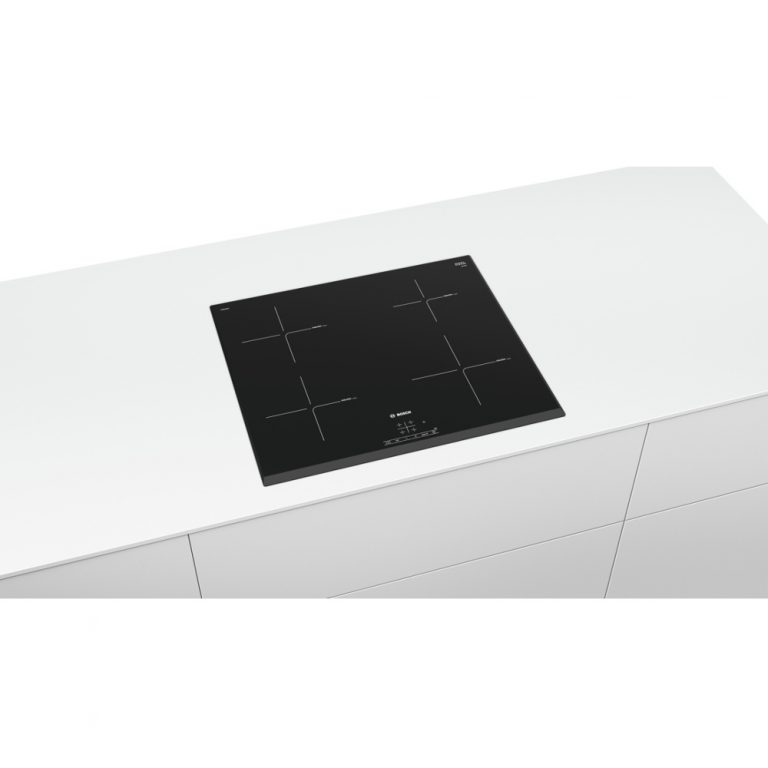 Further details can be found on our delivery information page.

Would you like our delivery team to take away and recycle your old appliance when we deliver your new one?

Need help or technical advice on a product or service? Get in touch, we’re always happy to help.

Induction hobs heat the pan not the hob using an electrical current. Induction hobs can heat a pan faster than a traditional gas or electric hob and are more energy-efficient. They’re also easier to clean, as you can wipe the hob shortly after using it. Remember, not all ceramic hobs are induction hobs.

An induction hob can only be used with induction compatible pans. You can use induction kettles (which are faster to boil than normal kettles) with induction hobs. The fine degree of control over the power of the hob is also good for tasks like melting chocolate or making a sauce.

In Bosch’s elegant U-Bevel design that features a bevelled front and sides, the PIE651BB1E Induction Hob is sure to look the part in any kitchen, while offering everything you’ll need to master the art of cooking.

Induction technology
Induction cooking gives an almost instant heat that’s generated directly in your cookware, allowing you to precisely control the temperature at which you cook.

PowerBoost
Another advanced feature of the PIE651BB1E is the powerBoost function that increases power to speed up the cooking process. For example, this hob can now boil 2 litres of water almost three times as fast as a conventional ceramic hob.

TouchSelect
Bosch’s updated control panel offers complete control of all cooking zones at your fingertips – simply select the power level you require and let the PIE651BB1E take care of the rest.

Additional features:
Timer with automatic switch-off
Automatic pan recognition
Variable 17-stage power settings for each zone
QuickStart function
ReStart function
Please note: there should be a minimum height clearance of 65cm between an electric hob and the cooker hood above it.

We offer FREE delivery on orders over £100. Deliveries of small items are made by courier and are the next working day after dispatch.

Large appliances are delivered by our own delivery teams, installation services can also be selected during the checkout process. Unfortunately, we are not able to deliver some large appliances outside of Norfolk and North Suffolk at the moment; you will be informed of this during the order process if you enter a postcode outside of our delivery zone.

Some manufacturers offer direct delivery of large appliances; you will be informed if this is available during the order process.

We aim to dispatch within 2 workings days of the order being placed. You will receive an email confirming your delivery date.

All installations are carried out by our own experienced engineers. Our installation services are only available in Norfolk and North Suffolk, you will be asked for your postcode during the checkout process to see if these services are available to you.

Upon receipt of your order, we will call you to arrange a convenient time for your delivery and installation to take place.

Everything you need to know about Quooker taps

As of June 2021, we’re an official stockist of Quooker and the only Quooker Centre in the region, and we couldn’t be more excited! We love to stock the latest and greatest products, and these unconventional taps are no exception. We’ll even be showing them off in our showroom, so pop in if you’re near Norwich for a demonstration. We have a live working Quooker Flex connected to the Quooker CUBE, so you can have chilled sparkling water, now that’s amazing!

For your convenience, we offer a selection of delivery and installation options for this product.

To enable us to check what is available in your area, please enter your delivery postcode below.